This year we have been honored to have many of our Ragdolls shown by our wonderful Ragdoll Breeder friends! We can not thank these friends of ours enough for presenting our Ragdolls with as much pride, as we would ourselves. It is rewarding to see our babies grow-up to be such successful show stars! Thank you to all of our friends and WillowTreeRag owners for presenting beautifully each and every one of our kitties on this page. It’s been a great 2011-2012 Show Season, and we’re looking forward to a handful of Regional Winners at the end of the year, with all of their hardwork!!

See our “At The Show” page for our titled beauties! This page will be dedicated to our show-to-show updates and achievements!

Currently being shown bred by WillowTreeRags… 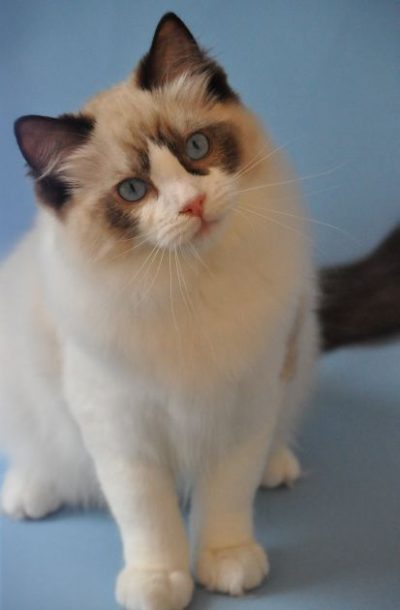 WillowTreeRags’ Once Upon A Dream

This boy is absolutely perfect to the standard, head to toe in type. He has a huge, solid body, and has since he was a young kitten. In these photos he is just two days over 5 months old. He is toy crazy, and loves to snuggle, give headbutts, and is so sweet and polite. Right when his pattern started to develop as a young kitten, I knew he was destined for big things. He is my pride and joy!! He has all of our foundation lines in him, and I couldn’t be more proud. At his first TICA show in Harrisburg, PA the week of April 11th-13th, he traveled like a veteran, and enjoyed the show! He was also awarded three finals, among them a BEST KITTEN final! For such a young baby, he is off to a fantastic start. He is the full brother to our most recent TICA Supreme Grand Champion WillowTreeRags’ What All Women Want (“Wes”). He is already a star…

Update 07/21/2014: Spencer went to his first show this past weekend in Ferndale, WA. He was the youngest Ragdoll cat present, debuting at his first adult show- only 8 months old, among 10 other adult Ragdolls. He managed to not only become a DOUBLE Grand Champion in his first show, but was also the BEST Ragdoll Cat at the show! WOW! What an amazing accomplishment for a young cat. I have a BIG smile on my face, knowing this line just gets better and better as they age. HUGE Congratulations to my friend Dana Croisdale of Lovestory Ragdolls on Spencer’s accomplishments. Spencer has never been more spoiled and loved in his life… I am so happy and proud of you two!! Oh, and the icing on the cake is that Spencer made his father a TICA OUTSTANDING SIRE!!!! WAY TO GO APOLLO!!! 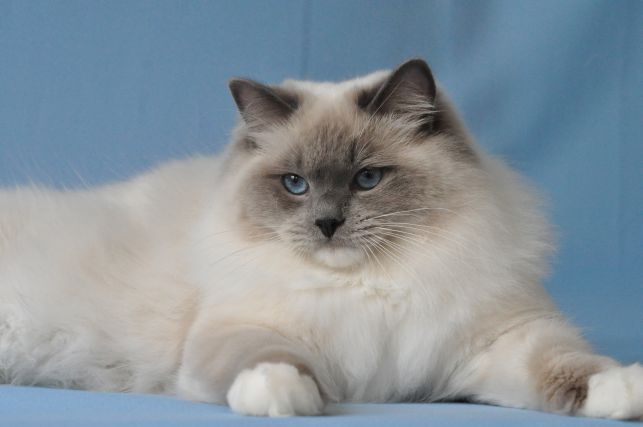 Allen is a beautiful Blue Point Mitted boy, always happy, outgoing and ready to snuggle. He is a sweet soul, and looks almost identical to his mother, Honeybun. Too pretty to be a boy, isn’t he? 🙂 Allen finished up his Grand Champion title in TICA this April 2014. He will soon be going to live with his new family. The photo above is of him at 10 months old. 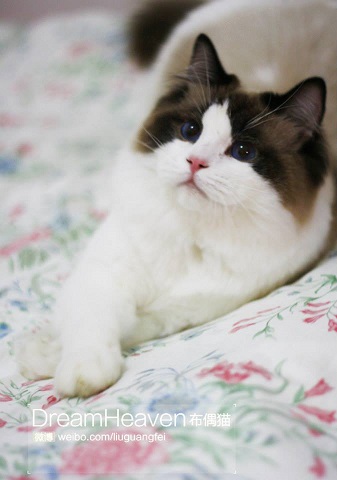 This is our gorgeous Chandler! Just like his mother in Seal coloring, he has a big, massive body, fantastic boning, amazingly flawless type, and the most intense blue eyes you could find! But, his best trait even over his beauty and correctness is his personality. He is a forever kitten, and just too sweet! In just a few short shows Chandler was awarded his Triple Grand Champion title in TICA, and also achieved the title of Regional Winner. He was sent to our breeder friends in China at Dreamheaven at 10 months old where he has already sired his first litter! 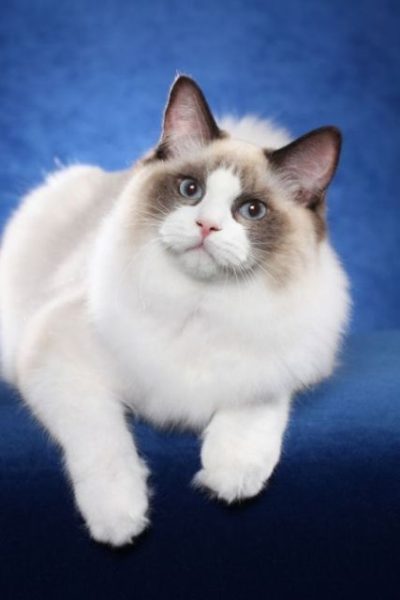 We just started our showing campaign with our beloved Cannoli in the TICA & CFA Kitten class! Cannoli is an absolutely HUGE boy with big boning, great type, and a TON of personality! Look for him at future TICA & CFA shows. We are looking forward to a great Fall show season with Cannoli. In 2014, Cannoli will fly to his new home overseas as a show kitty and future stud.

Cannoli has now gone on to live with his new owner, my friend Chris in China as a future daddy!! 🙂

Update #2: Cannoli went to his first TICA adult show on May 10th & 11th in China, and did FANTASTIC! He was the BEST CAT IN THE ENTIRE SHOW among great and heavy Ragdoll competition! He received 6 Best Cat finals, and 3 2nd Best Cat finals and finaled in every ring during the 10 ring show! He achieved the title of QUADRUPLE GRAND CHAMPION in just 1 show!

Here are a couple updated photos of Cannoli at just about a year of age enjoying his new life in China! Look at how happy he is! Cannoli has been enjoying the outdoors when his new owners take him for walks and to the playground in his harness & leash…

WillowTreeRags offspring showing with our breeder friends during the 2013-2014 Show Season…. 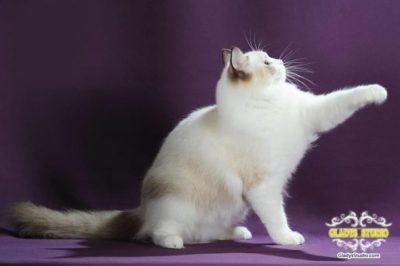 Tierro is a gorgeous Seal Point Bicolor Ragdoll who flew to my friend Shereene in Kuala Lumpur, Malaysia in 2013 to be her beloved pet and show alter. Tierro hit the show halls as a kitten, and once he graduated to the Premiership class, he really took off! At just 9 months Tierro became a CFA GRAND PREMIER! He is our first homebred CFA Grand Premier, and our second CFA Grand. Tierro is the son of Swag, and the grandson of Tao through his mother Aria. Tierro is a super sweet boy, and steals the hearts of all those who get the chance to meet him with his trademark Ragdoll personality and gentle heart. These photos were take when Tierro was just 10 months old. Thank you Shereene for loving Tierro so! You have done us proud! 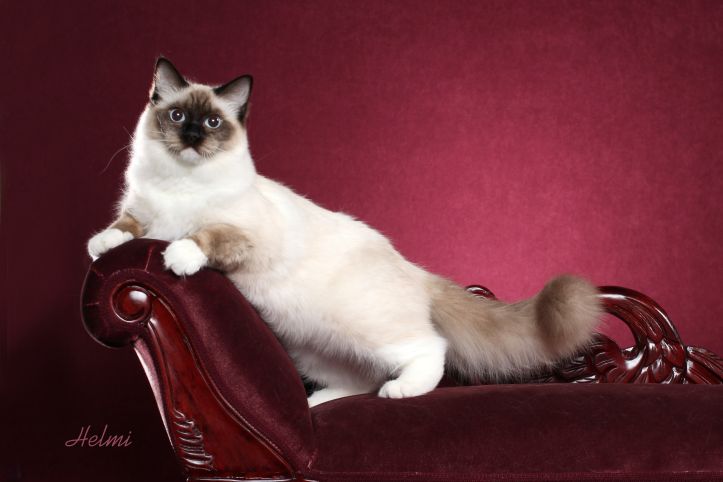 Syl is currently showing in the TICA Kitten class with her wonderful owner and my friend Sharon Shulby of Magnadolz! Syl is a gorgeous, large, typey, perfectly marked baby who is sure to mature into a serious show winner. She’s a great example of one of our wonderful Apollo girls! Syl has hit the shows as an adult! 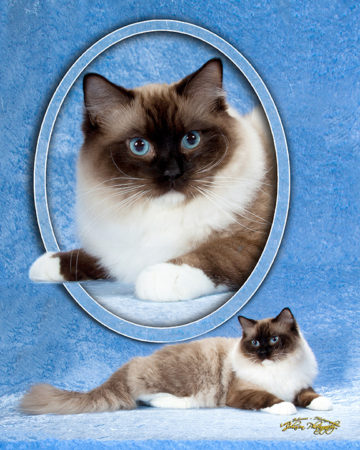 WillowTreeRags’ What All Women Want

Photo by Larry Johnson at 9 months.

Wes is an absolutely outstanding example of the Ragdoll breed. He is lovingly owned, cared for, and shown by my friend Pat Doss. He is just starting his show career now. Look for him at the Ragdolls Around the World Congress in Las Vegas this October! Wes is perfectly in every single way, and a HUGE boy! Another perfect example of one of the outstanding kittens produced by Apollo. Wes is the littermate to Syl (photographed above).

On February 2nd, 2014 at the PartyCats show in Atlanta, GA Wes received his BEST CAT from TICA Judge Stephanie Smith, which made him a SUPREME GRAND CHAMPION! He is Apollo’s 6th Supreme, and 5th Mitted Supreme!

“Flora” is currently being show by Desirae Pausma of Rouletii Ragdolls in the TICA Great Lakes Region! Thank you Desirae for loving her, and presenting her beautifully at the shows!

UPDATE: FLORA HAS SUPREMED!! On October 12th, 2013 at the Franklin Park, IL TICA Show Flora was awarded her BEST CAT final by judge Kim Chenault! We are SO proud of Flora, and thank Desirae for showing her in top form the whole season! 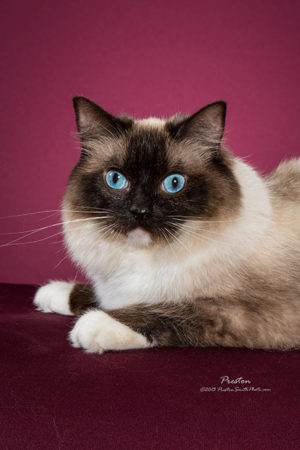 “Gena” is currently being show by Desirae Pausma of Rouletii Ragdolls in the TICA Great Lakes Region! Thank you Desirae for taking such wonderful care of Gena and showing her so perfectly!

Update: On the SAME day that Gena’s 3/4’s sister TICA SGC. WillowTreeRags’ Goddess of Rouletii (above) Supremed, so did Gena!! She was awarded her BEST CAT from judge Jim Armel on October 12th, 2013 at the Franklin Park, IL TICA Show. Way to go, Desirae!! 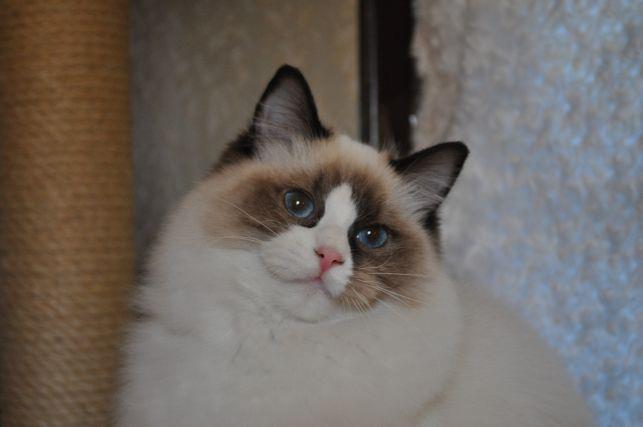 Hanselina has had monstrous success at her cat shows! In only 3 TICA shows, she had a total of 31 finals, including many BEST KITTENS! Hanselina is truly an exceptional girl, from her wonderful body confirmation to her flawless profile, bunny coat, and eye color… she’s truly unbeatable!! For her quick show success Hanselina earned a Regional Win! She is also the 11th Best Ragdoll Kitten, INTERNATIONALLY! What a feat for a kitten who only attended 3 shows! Hanselina now lives with my friend Aleksandra Turjak of Von Imp Ragdolls in New Zealand. 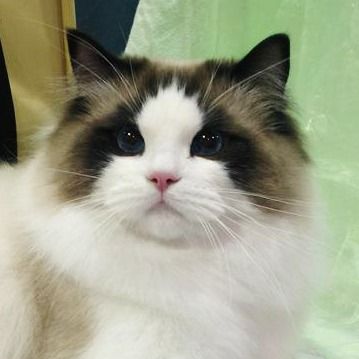 Swag did exceptionally well this year. As our future stud, and fantastic outcross for us we were so proud of him! He started off showing in the Fall of 2012 as a kitten. He did outstanding, with a blow-out show in Hartford, CT. He was the 3rd Best Kitten in the entire show, and the Best Ragdoll Kitten! After that show he attended the 8th International Ragdoll Congress in York, PA where he was named BEST RAGDOLL KITTEN by TICA Judge Hisako Yamada! We were so proud, and what an honor among the best breeders in the WORLD. That was one of the best moments of the year and biggest accomplishments for Swag. For Swag’s show success as a kitten, he received a Regional Win! Swag entered the adult class at his first show in Parsippany, NJ in January 2013, he went to just 3 shows and obtained Quadruple Grand Champion status, along with a BEST CAT from Carol Lawson, on his 1st Birthday (March 17th, 2013) to finish off his Supreme Title!! He is just a few points short for his Supreme title, so he will be coming back out in Fall 2013 to finish the highest title that can be achieved in TICA. It’s been an honor having Swag join our cattery. His first kittens have already arrived, and they are top quality just like their sire. We couldn’t ask for a better stud. He is absolutely a perfect fit here. We can’t thank his breeders Arianne Mendenhall & Roslynn Percival enough for letting us own, show, and breed this boy! He’s already becoming a key part of our line.