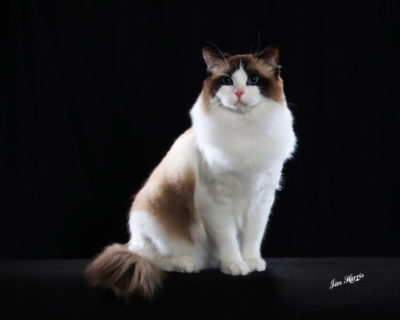 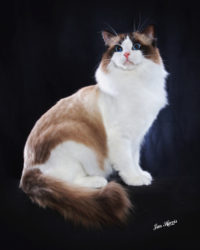 Comet is our beloved son of our long-time king Apollo. Comet is not only the son of Apollo who was a very influential sire for our line and many in the Ragdoll breed but was awarded TICA’s most prestigious breeding title of “Outstanding Sire” (OS), but Comet’s mother, Wild Rose, also was awarded the title of TICA “Outstanding Dam” (OD) with very few litters/kittens produced. It is very rare you see many Ragdolls with two parents who have “Oustanding” titles awarded from TICA. To say we are excited about Comet being our cornerstone for the future of our breding program is an understatement. I am extremely proud of the greatness we have experienced from this line. A bit about my beloved Comet… like his father, he is a huge, tall, long bodied and heavy like a bag of cement! He is a gentle giant, always looking for cuddles. Like his sire, he loves to talk and purr, looking for love and a conversation! He is a “forever kitten” never passing up the chance to play and entertain all of us. His markings are flawless- he has full back color, clean all white legs and pink paw pads, as well as a perfect inverted “V” face mask. His head is large and profile is perfectly moderate and well-balanced, the way a Ragdoll should be. Comet has beautifully shaped, large eyes with vivid, intense blue eyes. Comet had a very easy but short show career. The shows he attended almost always regarded him as the Best Ragdoll present in every show. The judges loved him and he received numerous Best Cat & Best Kitten finals in both classes.

Being a son of Apollo, Comet is my star, my pride and joy. His first kittens in 2021 have taken my breath away. They are hands down consistently the nicest (to the standard) kittens we have ever had the pleasure to raise. 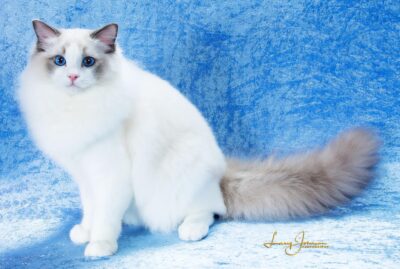 I can’t give enough of my thanks to my dear, true and beautiful friend Yuansheng Liu of OrangeAngels in China, for allowing our new beautiful boy we call “Dave” to join our cattery here in the USA. Our hopes are that Dave begins breeding mid/late 2022 and takes over Hushy’s spot in our breeding program. Dave is a stunning boy with perfect bunny-type coat texture, true to the standard head type that you couldn’t flaw if you tried! Dave attended one cat show as a kitten where he was not only the Best Ragdoll kitten in the show, but the 2nd Best Kitten at the entire show! Unfortunately he became too territorial with the smells and sounds of a cat show hall when he matured a bit, so he  has stayed home where he is happy being pampered in his own comfort and bliss! I know that his kittens will do his father very proud! 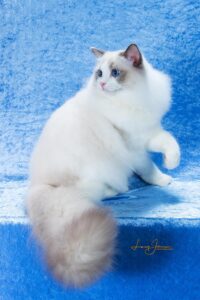